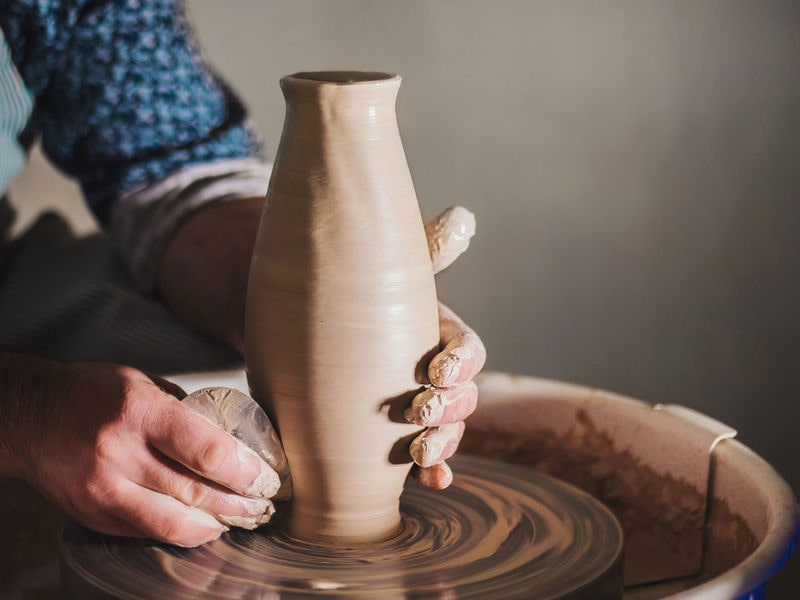 Pottery (from Greek keramos – clay), or pottery craft is the production of various objects from clay in combination with mineral additives. After firing, the clay is sintered with inorganic compounds …

Pottery (from Greek keramos – clay), or pottery craft is the production of various objects from clay in combination with mineral additives. After firing, the clay is sintered with inorganic compounds and becomes hard and strong.

Pottery originated about 27 thousand years BC in the Paleolithic era. But in those distant times, mankind had not yet invented firing technology. Therefore, only ritual figures and primitive decorations were made of clay.

About 8,000 years ago, in the Neolithic Age, people invented firing. Since then, clay has been the main material for making tableware and household utensils and is used as a building material.

The first products made of fired clay, they are the oldest evidence of the first civilizations, it is rough, irregularly shaped pots for cooking. The bottom of these pots was rounded and even pointy. Food was cooked on primitive hearths of stones put together. The pot with the rounded bottom was simply placed between the stones of the hearth.

In the Late Paleolithic period, flat-bottomed pots appeared (which, presumably, indicates the use of stoves rather than open hearths in dwellings). Then a moulded ornament appears on the surface of the clay products. And finally, about 6 thousand years B.C. there are paintings on ceramics.

Archaeologists refer to this period as the birth of the first world cultures. Clay statuettes, household utensils decorated with drawings and ornaments, tableware of various forms – all this is material evidence of disappeared civilizations. At the same time, mankind invents a clay block of burnt bricks, without which it is impossible to imagine construction even in our time.

Pottery acquired special significance in the Bronze Age – about 4 thousand years BC. In the states of Egypt and the interfluve, the profession of potter was considered honorable. Pottery was passed down from generation to generation – from father to son. At the same time, the pottery wheel and glaze were invented.

A potter’s wheel is two horizontally arranged wheels fixed to a vertical axis. The lower wheel rotated with its legs, the upper wheel was fixed with a blank of raw clay. Usually the wheels of the potter’s wheel were made of stone, which gave them the properties of heavy flywheels, which retain the rotation for a long time.

The circle made it possible to obtain ceramic products of the correct shape. And the glaze, a layer of drunk vitreous substance (at the heart of the glaze, like glass – sand and soda), gave the ancient dishes waterproof. Before the ancient Egyptians invented the glaze pots had to be treated with organic substances.

One of the oldest recipes (it can still be used today if necessary) is that the finished pot was filled with milk and put in the oven to languish. In the pores of the walls of the clay vessel formed a solidified fat film, which prevents the absorption of porous clay of any other liquid. But as time went by, the film burned out, and the vessel was leaking again.

The addition of metal salts to the glaze gave ceramics one color or another. Glazed clay objects found during archaeological excavations of Egyptian cities are not only historical, but also of artistic value.

About 2 thousand years B.C. in Ancient Egypt there is earthenware – thin finely porous glazed ware. At the same time, the appearance of white clay glazed ware – kaolin – in China.

The technology of making objects from clay is elementary simple. If we take dry clay, mix it with a little water and thoroughly knead it to give the workpiece the consistency of the dough, we get a material from which you can sculpt a figure, a flat, a vase and so on.

The finished product has to be dried. If drying goes naturally, and the surface of the pot or clay figure is not processed in any way, we will get the product from terracotta.

Terracotta is the oldest type of pottery. But it is difficult to keep unfired terracotta intact, especially if the walls of the clay vessel are thick. In this case, the clay dries unevenly, and the upper, quickly drying, layers crack. This is why the unburned terracotta is an extremely rare archaeological find.

The kiln firing speeds up the drying of the clay product. In addition, the upper and deep layers of clay are dried evenly and simultaneously, preventing the clay from cracking. The fused clay minerals give the terracotta workpiece its strength. Therefore, terracotta dishes made of roasted clay are better preserved and are found more often.

And what about pottery today? This eternal craft is not forgotten at all. Ceramics is one of the most popular forms of modern applied art. Moreover, ceramics is widely used in the field of high technology.

If you look at the device of a personal computer or television, you will find that the insulators of many electronic parts are made of ceramics. The wear-resistant ceramic bushings are installed in car engines. Ceramic refractory tiles cover the hull surface of a reusable spacecraft. Finally, at home we use ceramic cups and plates. And we even live in houses built of bricks.